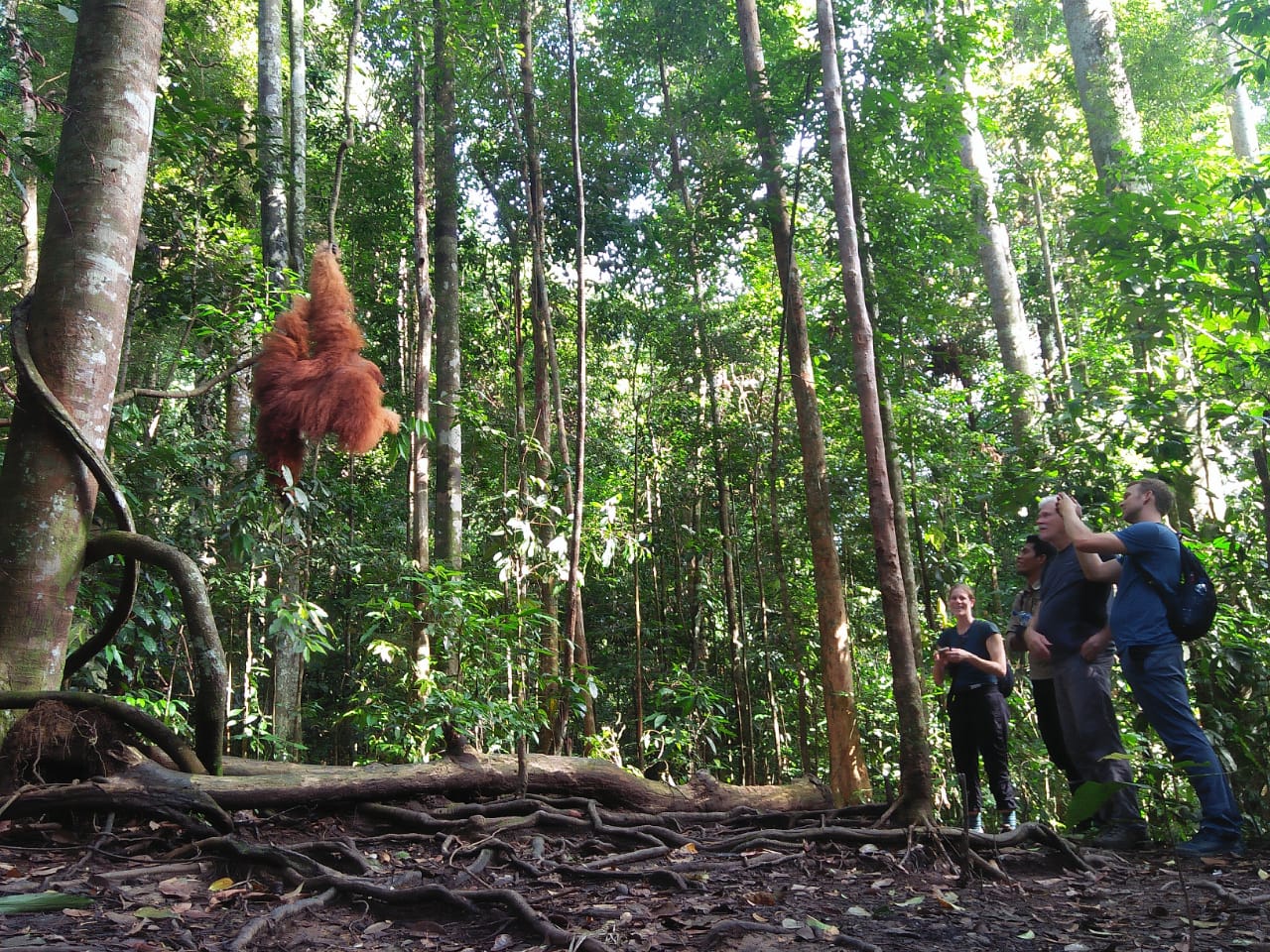 The road from Lake Toba and/or Medan to the jungle preserve of the orangutans in North Sumatra begins a complex juxtaposition of the wild, semi-wild, and actively destroyed ecosystems of the region.

It takes over 3-4 hours to snake the barely 50 miles separating the sleepy Jungle town of Bukit Luwang from the 5 million inhabitants of the city of Medan. In that time the scenery gradually transitions from dense city to road-hugging villages until you see what was once pristine forest but is now a widespread area of clear cut and burned forest sitting next to neat rows of newly planted palm trees planted on behalf of giant companies.

The visual legacy of destruction and the squeezing of so much habitat essential for the dozens of endangered species here tells an obvious story. But in fairness, in later conversations both here on Sumatra and in the tourist-dependent region of Yogjakarta we hear from people about the economic importance palm (and coconut) has to their families livelihood.

Still, we were happy to arrive in Bukit Luwang at the edge of the remaining true jungle. We began our stay by checking into the excellent EcoLodge (just don’t eat dinner here) and preparing for a one day jungle trek.

If you are planning to do a trek it pays to do your research ahead of time. First, this will help you avoid the dozens of touts trying to sell you a tour as you arrive. And second, many operators here actually feed the orangutans so that they remain close to tourists for photos. This is obviously terrible for them and erodes their ability to survive in the Wild.

Trekking for Orangutans in Bukit Luwang

We begin that morning by walking directly up a hill from the lodge and into the Gunung Leuser National Park accompanied by two excellent guides-Sandi and Jampop (sp?). One would spend the morning ranging far ahead of us to find the nests created by the Orangutans.

Throughout the morning we encounter birds and the very cool Mohawk Monkey (officially the Thomas Leaf Monkeys).

And then we see the first orangutan, a big male. He’s just hanging out, and it’s awesome.

I didn’t really know what to expect but this exceeds expectations. I mean this guy is HUGE. We settle in and after watching us for awhile (broken up only by the occasional scratch) he decides we aren’t a threat.

And then he begins to eat. His movement is at once graceful and lumbering and economical. He doesn’t seem to swing through the trees so much as lean over and grab whatever is in reach and muscle it in his direction until it is close enough to move to.

It’s an astounding and humbling twenty minutes that brings into stark relief the importance of protecting this habitat. The fact that we were able to observe him from relatively close for so long is another facet to the complexity between man and ape here however. While we were told that this orangutan began life truly wild he is clearly at least somewhat habituated to the presence of humans. And many of the apes in this section of the jungle were actually reintroduced here in the 1980s-90s by the Bukit Lawang Rehabilitation Center, an organization with a laudable mission but imperfect execution that was closed in 2002 after being deemed unsuitable to continue.

A Mom and Baby Orangutan

We move on from the male and only thirty minutes later, while eating some fruit and flicking tiny leeches off our socks, we hear another orangutan. This time it is a mother and daughter approaching us, no doubt drawn by the smell of our food. To get closer the mom must navigate a large break in the tree foliage. She does this by first placing the baby in safety and then rocking back and forth until generating enough momentum to grab the far branch. Stretched out like this she holds still while the baby crawls across her body to the next set of trees.

There the mom sits and watches us while the kid gets to exploring. And she is a bit of a spaz. Climbing around, shaking branches, and generally behaving like a kid. At one point she grabs a 12+ foot vine that isn’t attached to anything and spends the next 10 minutes trying to figure out why it doesn’t feel stable enough to swing from. It’s a delight to watch and we do so until our necks hurt from craning up.

The trek ends with a float down the chilly and refreshing river on large inner-tubes lashed together with twine. The rapids are fun, and on one I actually get thrown out of the tube and dunked in the river (it’s not scary, and I needed a shower anyway).