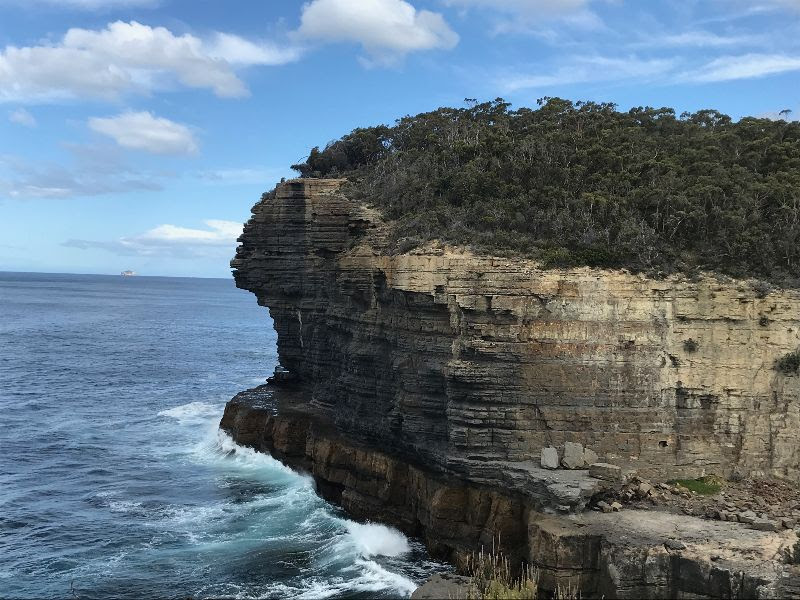 Adventures Down Under: Three Weeks in Melbourne and Tasmania

Australia had the perhaps unenviable task of being our last country before returning to the States. While we knew we were starting in Melbourne to accomplish Victor’s longtime dream of seeing the Aussie Open, we allotted ourselves a month here because we also wanted to see as much of this massive country as we could. (It’s quite a long flight to come back for unfinished business, after all.)

In some ways, with all the fish ‘n chips, pints, and meat pies, Australia feels like a big Britain down under. However, as we’ve stayed here a bit longer, we’ve begun to get a sense of Australia’s quirks. The whole country has been astir over:

Now that we list them out, however, perhaps each of those controversies aren’t uniquely Australian, but rather local examples of global concerns…

One thing that is certainly unique is the language here; Aussies really do speak an entirely different English. There have been many times where we look at each other cross-eyed after a sentence on the radio completely mystified us. A “squiz” is both a quick look and a quick pee, a “schooner” is a size of beer you can order, an “esky” is a cooler, a “yarn” is a chat, and “hot and bothered” is literally a feeling about the weather, not a sexual idiom.

This language barrier extends to ordering coffee, too. We’ve had to accustom ourselves to the differences between a short mac and a long mac, traditional and topped up, cold brew and cold drip, flat white, long black, and cappuccino. Our confusion is often worsened by the fact that we are foggy-minded from caffeine withdrawal when trying to order.

In this post, we’ll talk about our first few weeks here including a week in Melbourne and a two-week road trip in Tasmania. (For Victor’s post on the details of our Tasmanian roadtrip, click here.)

Fulfilling a Life Dream: Going to the Australian Open

There were many push factors that launched this gap year—our lease being up, our itch to move out of New York, our exhaustion from our weekday and weekend jobs—but one dream that helped pull us to the far eastern hemisphere was Victor’s life-long wish to see the Australian Open.

Many of you know that our second date nine years ago was at Wimbledon, and we loved getting to see the US Open when living in Queens. Throughout our months of travel and deciding on the fly where to go next, one thing that grounded us was knowing that on January 24th we’d be sitting in Rod Laver Arena in Melbourne.

Over the course of two days we were quite successful fans! We rooted 5 Americans to victory, although the notable American defeat was Serena. (Victor is convinced he’s bad luck for Serena having now watched her lose all three matches he’s seen her play at Majors). We also enjoyed meeting up with Mica’s childhood friend Jenna who was launching a gap year of her own along with her husband Jake.

On a slightly more ominous note, the sky sprinkled red bushfire rain on us as we were leaving Melbourne arena. It literally left orange specks all over our new Aussie Open gear. While we were so lucky to be safe from the bushfires and blessed with pretty good air quality throughout our time in Australia, it was disquieting to feel the wind blowing the remnants of that enormous natural disaster into the city.

The Open wasn’t all we did in Melbourne. We ogled its 19th century wrought iron balconies, poked around its “laneways,” and learned about its history as a gold mining town. (Note: Melbourne proudly proclaims that unlike its rival Sydney, it did NOT originate as a penal colony.) We also fully explored the diverse, trending neighborhood of Brunswick where we were staying through a cult denim store, our funky neighborhood art gallery, as many coffee shops as we could visit, and lots of great food from Israeli to Italian to Japanese. (Read Mica’s full post on the neighborhood here.) We also took a day trip down to the Mornington Peninsula where Victor refreshed his scuba-diving skills and Mica learned through trial and error that she will stick to snorkeling.

A Devil of a Time in Tasmania

Before we landed in Tasmania we knew very little about it other than that it was far, wild, and home to the Tasmanian devil. But we’d heard it described as the “love child of Australia and New Zealand,” so we devoted 12 days to exploring it.

Despite only being the size of West Virginia (or Ireland) Tassie was worthy of every day we gave it. Driving the island was a perfect way to combine lovely vineyards, rugged coastline, deserted sandy beaches, truly alpine hiking, and diverse encounters with interesting wildlife.

We didn’t have to wait long for the wildlife. We began our trip on the south end of the island with a visit to an “unzoo” to see Tasmanian Devils. These animals have 80% of the jaw strength of a lion even though they’re only the size of a large guinea pig. At a feeding, we heard them crunch through fur and bone on their prey and were relieved to learn they only eat dead animals.

Not all the animals were so terrifying though. We saw tons of wallabies bouncing along on the side of the road, and chubby wombats roaming in the national parks we visited. Plus we got to feed Forrester kangaroos (smaller and friendlier than their mainland cousins). It was so cool to see a mother carrying a joey in her pouch! (However, by the size of his protruding feet, we felt it was about time for him to move out of the basement…)

Victor’s friend Cam joined us for a few days as we began our counter-clockwise loop of the island by poking our way up the east coast. Together, we hiked out into the headlands of Tasman National Park, with views out over the sea towards Antartica.

We also toured Port Arthur, a former convict prison for Brits sentenced to “transportation.” The most common crime that received this draconian punishment? Simple forgery or petty theft–either of which seems like a rather drastic punishment, if you ask us.

After camping in the world’s greatest paintball field (with a giant TV to watch more of the Aussie Open) we continued our drive up the east coast. In Freycinet National Park, we hiked to the summit of Mount Amos in order to catch a glimpse of the majestic Wineglass Bay. From here we found a stunningly remote campsite with a gorgeous sunset on the red rocks and sandy beaches of the aptly named Bay of Fires.

As we rounded across the island’s northern coast, we visited several vineyards and the world’s biggest lavender farm! We loved the incredible scent as you walked among the rows of flowers, and the lavender ice cream was delicious, too.

After the lovely east coast we turned to the more remote and rugged western part of the island. Here unsealed roads stretched into a series of large national parks and the few cars we did pass all had their exhaust pipes wound up to the roof so that they could traverse muddy, flooded terrain. When we say remote, we mean it. To access many of the hikes in this region, you have to FLY in and hike for at least a week to wind your way out! Because of very wet weather and limited time, we stuck to more accessible 1-2 day hikes in this region.

Our first stop was an overnight hike in Walls of Jerusalem National Park. This park is named for the distinctive rock formations that ring its vast alpine wetland. Climbing past a never-ending series of alpine lakes we pitched our tent and explored the area’s lakes and peaks. Little did we know what the night would have in store for us.

While we were only moderately terrified at our first sighting of a Tassie devil in the “unzoo” when we were safely behind a wall, we were definitely unsettled to see a wild one in our campsite at dusk. This nearly blind creature followed and sniffed us for several hundred yards before rushing towards us. Victor chucked a rock near it, which we think was enough to show it we were alive and thus not a good meal. However, as if devil nightmares (and a veritable sea of stars) weren’t enough to keep us awake, we noticed a consistent rustling and scratching on the front of our tent. When we shined a flashlight, we faced 2 pairs of large hungry eyes atop our backpacks.

A possum pair had arrived, and once they smelled our food they wouldn’t leave for the rest of the night. In a literal game of whack-a-mole, Victor spent much of that night smacking the possums with a hiking pole when they appeared. Eventually he got good enough at hearing them approach on the tent platform that he could rustle the hiking pole enough to startle them away while half-asleep. Neither of us got much rest that night. Groggy in the morning, we were quickly scared into alertness as we encountered three of Tasmania’s venomous black tiger snakes along the trail too. We were very grateful to sleep indoors the following night.

It was with some relief that we headed to Tasmania’s most popular national park to see Cradle Mountain. Here we car camped in a fully-equipped trailer park while taking a stunning hike up to Marion’s lookout for views out into Tasmania’s southwest mountain ranges.

The next day we changed plans due to a massive storm that brought snow and freezing temperatures and bombed down to Hobart for a couple of nights to wait out the weather in the state’s charming capital city. Hobart has a lot of Boston in its coastal colonial style, and recently has come to renown for a bizarre modern art museum which Mica visited. She summarized its collection with the phrase “data mining, death, and genitals.” Victor gave it a pass after that review.

We reemerged with the sun to explore nearby Mt. Field National Park. Here we also car-camped while going on an epic alpine day hike that combined freezing rain and alpine wind with sunny skies and views of glacial tarns. It was a fitting goodbye to the rugged Tasmanian environment.

On our last day we left ourselves just enough time for a final vineyard visit before hopping on a flight to Perth, literally the furthest city in the world from New York. We left Tassie so grateful for the time to explore such distant places. 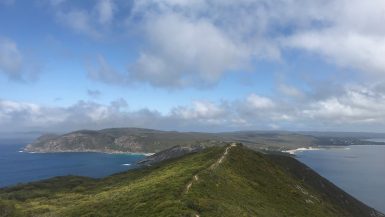 Red Roads and Blue Ocean from Coast to Coast in Australia 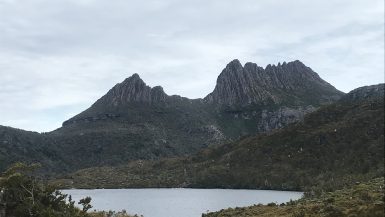 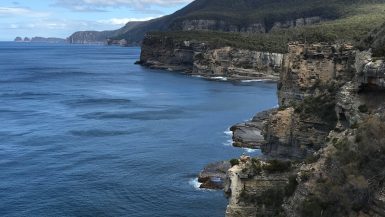 A Devil of a Time Driving Around Tasmania’s East Coast